This year, as I did for most years, started with a planner and the best of intentions to:  map out my week, keep track of what I was doing, and make sure I was on top of all my deadlines.  But something happened along the way...and I've actually stuck with it for the entire year so far, and I doubt I'm going to stop, because it's actually been really useful to keep track of freelancing  assignments that have a tendency to overlap one another and bunch up.

(Also--Scrivener rules and if you're a serious writer you should just shell out $40 because it's just that awesome and incredibly powerful.  I've been finding that the "word count target" feature is really useful when writing fiction.)

It's a simple, cheap planner (read:  the only one I could afford as of last year) but it does the trick:  the vertical week layout is nice, and my handwriting isn't that big, so even though the columns are only about an inch wide it's pretty okay in terms of the amount of space I have to work with.  I have an addiction to Moleskine products, as I've mentioned before, and since they sell vertical planners, I'd already set aside some money for buying their planner for 2016 next year and that would have been the end of that.

I clicked on a video on decorating planners on YouTube, and have become entirely obsessed with the idea of purchasing an Erin Condren planner.  It is, as far as I can tell, the Cadillac planner of people who decorate their planners--with washi tape, fancy Post-It notes, stickers, arrays of markers and stamps.   And this from someone who has, to date, owned exactly two rolls of washi tape.  I don't quite know what it is about watching people decorate their planners that is so hypnotic.  I do know that I've already put in an order for two different sets of fancy sticky notes (from Japan) with the idea of making a 2016 planner totally glam-worthy.  (My personal style tends to be more understated, actually, and it's hard not to feel a little ridiculous about all the stickers and stuff when your main writing implement is a Parker fountain pen).

The main thing is the vertical weekly layout over two pages.  I've been trying to find another planner (yeah, I know it's early) that has this feature and I've been coming up short.  Yeah, there's the Moleskine Dashboard  and that's probably what I'll end up ordering, but, well, it's black.  The pages are pedestrian--boring, even.  At the very least, they could have a bit of color, right?  But that's not Moleskine's style, and frankly, it's not really mine, either.  I mean, I do use sticky notes in my planner and I do have a set of markers that I use to highlight things and block out days, but the kind of insanity that prompts people to spend that much time planning out their weeks is a little much, even for me.

And at the end of the day, well, it's a planner.  It doesn't really matter how pretty it looks if you never get done what you planned.  On the level that matters, I realize this, just as I realize that spending $70 (the actual planner is "only" $50, but international shipping is an extra $20) on a planner borders on the insane and ridiculous.  But still, there's a part of me that wants to try...
Posted by Jules at 10:41 PM No comments: Links to this post 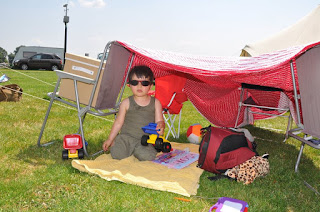 Against all odds, we somehow managed to squeeze in a camping trip this past weekend.  Somehow my freelancing assignments all ended right before (and picked up again right afterwards) so the entire weekend could be completely devoted to:  flying kites with kidlet, reading and finishing a book, babysittig kidlet while he zooomed around on his loopfiets, letting Karel do all of the camping stuff (I figure that, if he wanted my help, he's a man and can ask for it), and eating too much barbecue.

Camping is the national Dutch pastime--like baseball in the US, but far more interesting.  For starters, it's a very regimented process, almost like booking a hotel:  you go online and tell people what you're bringing (tent or trailer) and how long you're staying.  There is no (or very little) random driving around the country and staking out a tent wherever looks good--mostly because pastures have been fenced off, the woodlands are engineered to be utterly inhospitable to this sort of impromptu overnighting, and the campgrounds are always, always, PACKED.  (At least on the weekends)

One of the nicknames the Dutch have acquired is the rather unflattering "snails"--as a reference to the very Dutch habit of packing a trailer (Brits: caravan) with all the comforts of home--especially the Douwe Egberts Rode koffie--and clogging up the highways in some other country, and in NL for the less adventurous.  The Germans retaliate by taking over the beaches around Scheveningen and Leiden.  Campgrounds typically have shower, bathroom, and laundry facilities; you can rent a bike for lekker fietsen and seeing the sights; the one we went to had a pool and playground and a riverside beach, along with boat rentals from a nearby company.  Some of them offer free Wi-Fi.  So really, all you really need is a tent and a sleeping bag and some coffee. 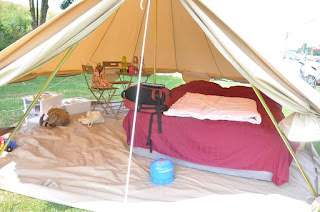 Our tent was not a sheet tossed over some lawn chairs, happily  That was kidlet's little play space that I'd set up to keep him out of the sun while the tent was still being set up.  Karel had acquired an uber-delux tent that allowed us to fit a full-sized air mattress and still have plenty of room to store all of our things in.  One handy feature was that you could detach the floor from the roof, which was a good thing to do with the weather being as hot as it was.  At night, we put the walls back down.  It was not the kind of TARDIS-like contraption that starts out the size of a pencil case and ends up being a comfy suite when unfolded--the tent is heavy, made of canvas and heavy-duty plastic, and requires no less than 24 spikes in the ground to set up. But it is nice; and with the bed, it wasn't all that different from sleeping at home, which is probably the only reason why kidlet slept at all the entire time we were there.

The one thing about camping that I really appreciated, from a practical point of view, was that there was zero pressure to dress kidlet.  I mean, yeah--if we'd left the campground I would've put him in his shorts, but as long as you're on the campground, clothing is "nearly optional":  people of all ages and physiques walk around wearing whatever they want, and on a day that's 34 C (that's 95 F) in the shade, that translates into a whole lotta bathing suits, even if the only moisture on your skin is sweat.  Kidlet spent a lot of time running around in his underwear--and he was still more-dressed than a lot of the kids we saw.  I myself went three days without shoes--tan lines around my feet and ankles have always bugged the living daylights out of me.

The campground we went to was situated on the Waal, so we almost had a riverside view; were it not for the row of caravans that remained steadfastly parked in front of our tent. Kidlet, being a transportation fanatic, still thought it was the best thing in the whole world--waking up in the morning and seeing a boat go steaming by.  By and large, it was a relaxing two days, not worrying about clients or deadlines and just being able to sit back and watch kidlet enjoy himself running around without shoes.

My inbox, when I came back, though...
Posted by Jules at 9:59 PM No comments: Links to this post