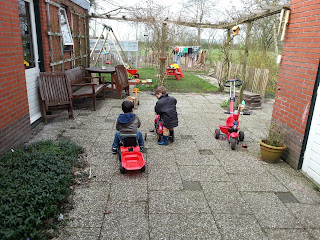 Every parent wants to believe their kids are talented in some way, and I am no exception. Part of the process of growing up and away, after all is finding out new things about yourself and your kids.

But there's a difference between actively encouraging your kid to develop his own interests (good) and pushing them to succeed because you've got issues (bad). What that difference actually is, in practice, though, is turning out to be rather difficult to discern in real life.

Kidlet has always been a motorhead, a gear monkey, a car nut--you get the picture. If there's a motor on it, he'll love it. He loves watching the lawnmower--the lawnmower--as it does laps around our building, cutting the grass.  He could quite literally sit at a construction site for hours if there's an excavator and a bulldozer.  I harbor a secret fantasy of bringing him to Schipol and relaxing for three hours while he watches planes.

But his real love is driving.

He got a push-car for Christmas two years ago and he's still coasting with that damn car all over the apartment.  Ever since he discovered the battery-powered cars at the Brakkefort I've been shelling out for the god-damned tokens so that he can get a drive (now up to two) in each time we go.  And pedal-carts--if it weren't for the fact that we go mostly at the non-peak times, there would be a lot more screeching kiddos at these places.  And he is...surprisingly good at it, able to wrestle huge steel contraptions that weigh more than I do  through hairpin turns and s-curves like I'd pushed one of those suckers out with him.

It's easy to see where this is heading: dreams of Formula-1 glory, like Max Verstappen, the kid who's just won one of the Grand Prix's in Spain.  Of course, I know this is a long shot, at best. And odds are he'll never get past just a few turns on the go-kart track for fun when he's fourteen. I would be okay with that--and that's what makes walking the line between letting him drive as much as he can and making too much of it so damn hard.  I mean, what is "too much" for a kidlet? I mean, if he likes it, what's the harm, right? And isn't the whole point of parenting teaching a kid to get up again when he falls down? Where's the line between encouraging a kid and pushing them?
Posted by Jules at 7:51 PM No comments: Links to this post