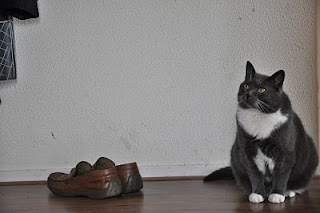 Being an ex-part incurs it's fair share of mental health hazards. I'm not talking about the culture shock, or the language difficulties. The latter is kind of irritating--I have "Dutch days" when I can talk and joke around with others, and other days when it's hard for me to figure out what's the word for something I've said a thousand times before. I know I know how to say what I want. Apparently there's a linguistic wall as well as a writer's block.

But that's a mere mosquito bite compared to rolling around butt-naked in stinging nettles. What really drives me crazy is when people ask questions like, "Do you miss the US?" and "Where do you work?" Not necessarily because they're bad questions, but because they're questions that people should know the answer to, or at least, know better than to ask. Maybe I'm just grumpy, but three years of answering the same questions can do that to you.

So, my top five questions I hate answering as an ex-pat:

1) Why did you pick the Netherlands? Because I like eating pickled herring...in all seriousness, though, you almost never pick up and move to a completely new country without either a job, or someone you know. Since I've been working here for a shorter time than I've lived here, it follows that I came here because of someone I knew. And yes, my boyfriend is Dutch. I don't know why I have to clarify that.

2) What do you do? I work in a lab (and keep two blogs and comment here and there and shoot fungi and go birdwatching and, well, Stuff). Please don't ask me to clarify, or ask me what sort of research I do, because unless you're a molecular biologist, you won't know what I'm talking about. Oh hell, I don't even talk about my work with my boyfriend, and he's a DOCTOR! Between 8 am and 5 pm I live in a whole different plane of reality that most people don't even know exists. Unless you're in my field, I really don't have time to explain wht the difference between phosphorylation and allosteric inhibition is.

3) Do you miss the US? Obviously I miss some of it. Amsterdam is not New York City, and no place on earth could possibly match the Strand. But I wouldn't have been here for three years if I missed living there. I'm fortunate that most of my friends are on Facebook and we keep up with each other there, and that they're the kinds of friendships where a space of years doesn't mean anything.

4) Wasn't it hard to get used to the language and everything? This stems from the fact that Dutch has a reputation for being a difficult language to learn. It's not that difficult to learn enough to get by--the biggest problem for English speakers is remembering to put the verb at the end of the clause rather than somewhere else. But the other part of the question is just...well, stupid. Getting accustomed to living in a country is as difficult or as easy as you want it to be. Keep your mouth shut and your eyes open, and you won't have much trouble.

5) Are you a student? I get this from strangers, mostly. Part of it is that I look really young. The other part is that I do tend to live and shop like a student (i.e., cheaply), and I do call my practically-speaking-basically-husband my boyfriend (and he's almost 40!). I am not a student, though, and I wish people wouldn't just assume that I am.
Posted by Jules at 9:07 AM No comments: Links to this post

On Thursday night I got a phone call from Boy at 1 am, saying that the Tweeb had diarrhea-and-no-it-wasn't-just-soft-poo, horking, wouldn't look at her food (very alarming in a cat that is always hungry), and was hiding under the sofa. The Tweeb has renal failure, so this was Very Bad News. He called the vet first thing on Friday morning, and my boss, upon hearing the VBN, sent me home early, so I got home in time to accompany the Tweeb to the vet.

The vet poked and prodded but couldn't find any physical cause for the sudden deterioration--she had been fine Thursday morning, yowling up a storm for her breakfast. Sub-cutaneous (sub-Q) fluids were given, and she handed me two cans of Science Diet a/d and an odd syringe with a ring around the plunger. The directions: force-feed the Tweeb, as much as she can take, and give 1 "click" of the stuff in the syringe (that's what the ring was for) to settle her stomach and make her poops solid again.

This morning, after a whole night of hiding under the bed, she got out from underneath the bed, and ate. On her own.

Here's hoping everything passes.
Posted by Jules at 8:49 AM No comments: Links to this post