Buses and Cars and Trains, Oh My!

Kidlet has always been a good traveler.  I feel like I have to start this post with that because everything that I'm going to write afterward depends on keeping that in mind.  Whether it's an afternoon or a morning in town, or a weeklong jaunt to Luxumbourg, he's never had a (much of) a problem sleeping in different situations and he simply loves riding in buses, trains, and cars.  And I've never been the kind of mom to carry around a ton of extra diapers, an extra outfit, twenty snacks, three packages of wipes, and enough toys to fill a daycare--what can I say, I'm lazy.

Laziness is also the driving reason why I'm an absolute minimalist when it comes to packing kidlet's things for trips.  This is all I'm bringing with us for a 5-day trip to Maastricht:  it includes clothes for me, clothes for him, all of our toiletries, snacks for the train (it's a two-hour ride), toys for a week, a grocery bag, diapers for night-time and emergencies, my planners, and my electronics (my laptop, tablet, phone, chargers). 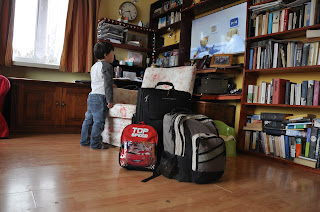 There's nothing must-have about my travel things.  I don't use packing cubes or anything like that, I don't have special games or toys, and I won't even have a stroller with me. A few things that I do to cut back on the bulk:
But really, the most important thing isn't a thing:  it's confidence that you know your kid and what they can handle.  It's being able to accept that sh*t happens to the best-laid plans.  It's treating a long trip like an adventure that it is rather than something to be endured.
Posted by Jules at 9:13 AM 1 comment: Links to this post