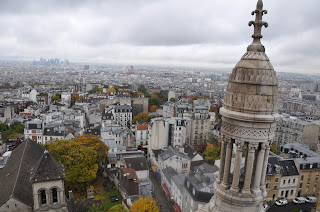 Paris!  What can I say? Despite being underwhelmed by it the last time I visited (though that was due largely to the fact that I was out €200 before I even got there and therefore could barely afford to eat) when I found out that Karel had never seen Paris properly, I was horrified and therefore decided that, rather than have an anniversary dinner in the quiet comfort of a gourmet restaurant appended to a hotel with kidlet being baby-sat by his aunt and uncle and cousins, we would drag a 3-year-old on a 5-hour train ride through a smog-ridden city and eat cheap food and walk until kidlet keeled over with exhaustion. 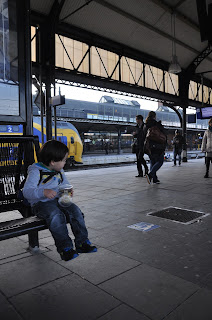 So you might be thinking that this might be a horror story about navigating Paris with a 3-year-old.  But actually, well, kidlet was very well-behaved the entire time.  When our train was stuck in Roosendal for over an hour, and then we had to take the slow train to Antwerp, there was only a minimum of fussing.  Then from Antwerp, we had to go to Brussels, which was another long slog and it was almost 3 pm by the time we were able to explain to someone at the Thalys (French high-speed rail company) what had happened and what we were trying to do.  It was slightly complicated due to the fact that I used e-tickets on my phone because printing stuff involved a headache-and-a-half (drivers for the printer not up-to-date with Windows 10, etc), and the Thalys service counter in Brussels Central for some reason couldn't look up the ticket information even though it was right on my phone, so our only recourse was to go to the main Thalys desk in Brussels-Midi.  Fortunately, news of the snafu at Roosendal had been sent down the pipeline well in advance, so one quick explanation to the people working the desk and we got a piece of paper and permission to board the next train to Paris.  And we were lucky to run into a sympathetic conductor--maybe it was just because we had kidlet with us--who was able to find seats for us in the first-class compartment, so that was nice.  So basically, by the time we arrived at our hotel we'd been on the road for 10 hours straight and it was a relief for all of us to crash and sleep, pretty much right away. 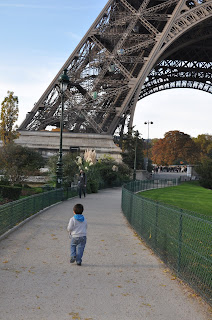 The next morning I'd planned on taking Karel and kidlet to the Eiffel tower and Notre Dame.  It was a beautiful day and kidlet got up at 6 am because he's kidlet and he always, come hell or high water, gets up at least an hour too early.  Karel had paid for breakfast at the hotel (ibis), so it was convenient and made more sense than wandering through the streets of Paris trying to find a place that doesn't charge €10 for a croissant, orange juice, and coffee.  I mean, yeah, the breakfast at the Hotel ibis was €10.50 but at least you had choices (croissant, madelines, pain au chocolate, fruit, yogurt, cheese, cold cuts, eggs) and decent coffee.

The Eiffel tower and Notre Dame were amusing just because they were sights you have to see for yourself, but I have to agree with Karel that the best part of the day wasn't the sights, it was walking through the streets, meandering along and looking at things that caught our fancy: a bag of dried lavender buds, for instance.  We were able to bribe kidlet into going quietly into Notre Dame with the promise of ice cream that we'd seen on our way there.  It was getting to see the sketchy parts of Paris and cramming ourselves into the Metro along with all of the other commuters. 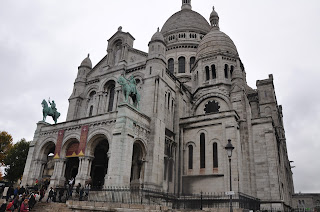 The next day we wandered slowly through Montmarte, the neighborhood our hotel was in. Our destination was the Basilica du Sacre Coeur but we had five hours to find it before we needed to get our bags from the hotel, so we were in no rush.  It wasn't as if it was hard to miss, either--the church sits at the top of an enormous hill, flanked by gardens. We went up the hill the hard way--on foot, yes, even kidlet, who seemed more determined than ever to reach the top--but there were tram cars ferrying passengers up and down the hill. Entrance to the basilica is free (always a perk) but you had to pay €6 for the privilege of climbing 300 stairs to the dome--which, to my mind, was definitely worth it for the view, though on the day we went it was drizzling a bit and the rain had turned the marble as slick as ice, so going down--especially since kidlet still has the outsized head of most toddlers--was a challenge, to say the least.

Food was still shockingly overpriced.  Granted, the portions were probably a little bigger than they are in the Netherlands, but still:  €12.50 for a grilled-cheese sandwich is outrageous.  If it'd been me and Karel alone, no doubt we'd do a lot more walking to find places to eat that are off the beaten path--food tends to be cheaper the farther away it is from tourists--but kidlet, tough though he may be, can only trek so far. But the indifference and bad service that people always seem to complain about when they visit Paris wasn't really an issue for us.  Contrary to perceived wisdom, I think we actually got better service because we had kidlet.  I mean, people actually gave up their seats on the Metro when we got in.  And then the proprietor of a cafe we stopped at for coffee gave kidlet one of those Eiffel Tower miniatures that they sell on the streets, and two free cookies. The Rough Guide was right about Parisians loving children--though I think part of it was also that we weren't trying to wrestle a huge Quinny stroller into the rush-hour Metro.

We opted to bring what we called the kiddie-backpack, one of those child carriers people typically use for hiking, instead of the stroller (the one pictured here is not ours--it's just an example of the type of heavy-duty child carrier we have). Part of this was because Parisian streets are not nice to strollers--there are cobblestones and potholes, and some of them are very narrow and most of them are crowded.  Part of  this was because tucking a Quinny into the baggage compartment on the Thalys is nigh-impossible.  And it turned out that, in Montmarte, the hills are so steep that stairs are used rather than normal methods of paving them, so a stroller would have been nearly useless anyway.  Not to mention that there's no place to park strollers if you want to go inside places like the basilica or Notre Dame, and that if you're going to a cafe it's a lot easier to squeeze between tables if you're not pushing a stroller around.  We took it with us everywhere we went, even though kidlet spent most of the time running around--empty, it's bulky but lightweight, so it wasn't too much of a burden and it was nice to have for the times when kidlet couldn't go on any more.

Suffice it to say that Paris was fantastic.  It's true, what they say about doing things with people you love.  And passing on the sense of adventure to kidlet--well, what could be better?